This site uses cookies to analyse traffic, remember your preferences, and optimise your experience.

In January 2020, the Middle River Water Treatment Plant (WTP) – which supplies drinking water to more than 1500 households and businesses on Kangaroo Island – was significantly damaged by bushfires.

Changing the configuration of the local water network, carting water onto and around the Island, and the assistance of a temporary mobile filtration plant supplied by the Australian Army meant a continued and safe water supply for SA Water customers was sustained to the Island during the fire. In parallel to this, a number of people including electricians, fabricators, construction workers, coordinators, engineers, and water treatment and quality experts worked together to clear debris and re-establish the site, getting the treatment plant back up and running in under two weeks.

While the WTP had resumed normal operation, two new challenges caused by the initial fire damage were discovered and Water Engineering Technologies stepped in to help.

The leaks didn’t result in any impacts to water quality or safety, but as the tanks are an important part of maintaining optimal PH levels for water treatment at the plant, their ongoing structural integrity needed to be addressed. Michael and Troy recommended urgent replacement of the tanks, prior to the next peak summer period, to eliminate the potential risk of plastic welds or the tanks themselves cracking and failing.

A condition assessment and investigation by Project Technical Officer Wade Collyer in December 2020 confirmed this approach and W.E.T carried out site inspections to determine the works required to implement a permanent solution.

Following a two-month lead time from order of the tanks, the team installed two double walled, self-bunded 3.3 kilolitre chemical tanks on a concrete stand. The scope of works, included:

Mechanical Apprentice Sam Butterworth was responsible for the design and pour of the tanks. Sam also designed, developed and installed all new pipework.

The plants current turbidity analysers weren’t running as effectively as they were prior to the fire damage, due to elemental exposure and accessibility issues.

The analysers are a critical control point used to prevent the entry of waterborne pathogens into drinking water. The replacement of three turbidity analysers and the construction and installation of an open enclosure to shelter the assets to prevent them from overheating in hot weather was important to the ongoing operation of the plant.

As an added challenge, documentation and site drawings had been destroyed in the fire. The WTP’s electrical cabling system therefore required testing and verification onsite during construction, to enable the W.E.T team to work safely, efficiently and complete the work in a short timeframe, so the plant could continue to meet customer demand. 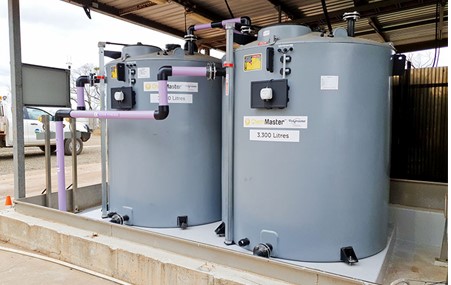